Zed is a highly loyal and affectionate dog.  He loves everyone, but he worships the ground Howard walks on!  Zed is extremely athletic and is famous for his flashy leaps in the sport of disc dog.  He is a Disc Dog Elite Champion and his freestyle disc routines are a big hit at performance shows.  Zed is also a talented flyball dog and lightning fast agility dog.  Both of his parents (Q and Kyle) are known for their great personalities, loyalty and versatility so it is not surprising that Zed is such a great dog!

Zed is a full brother and littermate to: 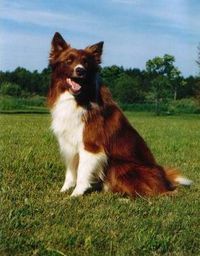